Time to let the cat out of the bag. This is a sad story.

The Cat Lady earned the moniker, but was affectionately known by her friends and family as Fern. Her personality was colourful and vibrant, as was her wardrobe, and her home. She was a wealthy woman that lived with, and loved 14 cats in this fascinatingly unique home. Cat calendars and cat decorations and cat themed photo albums filled with cat photographs and cat themed everything else you can imagine filled the home.

A pair of photographs I came across depicted her car sitting in the glass ceilinged garage at the rear of the house, the license plate read 'CATS 14' and across the hood and automatic headlight covers were airbrushed images of...you guessed it - CATS!

This was the second stop on the East Meets West Tour with Freak, Doom and Dallas in late August of 2012. The home itself was set far back from the road down a long winding driveway along a wealthy stretch of a rural road in Burlington, Ontario. As we approached the home, anticipation was eating me alive. I'd been waiting for months to finally get my paws into this place and poke around, and the time had finally come.

A 360 degree greenhouse surrounded the circumference of the house, oddly filled with only fake plastic flowers and plants, and the pungent odor of rotting cat litter baking in the sweltering heat.

A fellow explorer by the name of Intrinsic volunteered some information that he had ascertained while researching the history of the property.

Fern was born Flora Fern Noak Miller in Vermont in 1909. She had three siblings, sister Grace and brothers Herbert and Irving. In 1934, the Miller family moved to Quebec. In 1914, she married Simon Ernest McCullough.

Fern relocated to this property around 1970 to spend her retirement operating a hobby farm, where she raised horses, ducks and geese. In her later years, she had this second home constructed on the property, so as not to be snowed in during winter months. She gave the original house, which is deeper on the property, to a young couple who would assist in maintaining the deteriorating property.

In photographs found throughout the home, Fern was always seen smiling,  usually wearing brightly coloured floral patterned outfits. Bright floral patterned wallpaper covered the hallways and rooms in her home as well, not just from floor to ceiling either, the wallpaper engulfed each room, up the walls and across the ceilings.

The large circular TV lounge room wallpapered head to toe was bizarre. I had looked forward to capturing this room with my camera but stood dumbfounded turning in circles and found it oddly difficult to photograph. I pictured Fern in floral patterned clothing sitting on the rounded couches, watching the X-Files VHS box set that was collecting dust on a table.

Much of Fern's furnishings, decorations and personal effects were still present, although it was obvious that some looting and vandalism had recently taken place at the residence.

The large two storey open concept kitchen and living room was a gorgeous living space and was still furnished and jam packed with Fern's former possessions. A glimpse into the latter part of her life was provided by a series of photographs, cards, and letters. And a glimpse into her surviving family's life in the years after her passing was provided by a series of notes and legal documents.

Quite ominously, Fern's quad cane stood alone beside the couch, as if she sat down there one day and never got up again.

Time to let the cat into the bag.

Heading upstairs to Fern's bedroom for some privacy, I closed the gate behind me, much like she would have done.

A degree of sadness overwhelmed me as I wrote this post, almost as if I am mourning a woman I'd never met. I got to know her here, just a little bit, and got the feeling I would have loved her if our paths had ever crossed. But alas, they did not, and Fern did what we all must eventually do, she left this world. Maybe I'm just mourning my own lost loved ones in an indirect way. Or maybe she reminds of my own mother, filled with such joy and love and light. Or maybe I just needed to cry today.

It is not a sad story though, is it?

It would appear that she lived life to the fullest and enjoyed herself. She embraced who she was and wore it proudly. Her wealth and her bright smile and style, her joy and her love of cats. Her family and her friends. Her luxurious property and her beautiful colourful home to match her vibrant personality. She had it all. She loved life and lived it to the fullest.

It is not a sad story at all, its inspiring.

In the three and a half years since my visit to what the Ontario urbex community affectionately refers to as the Cat Lady House, a never ending parade of vandals have absolutely destroyed Fern's unique old home.

With cleanup underway and an impeding demolition looming, the story of the Cat Lady House came to an abrupt end last night, as the entire home burned down in a fire that has been deemed arson. 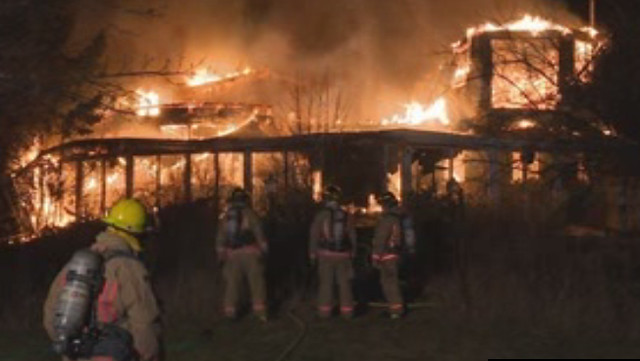