The small town of Gelert, Ontario was settled in 1860, but boomed virtually overnight in 1878 with the arrival of the Victoria Railway. The town was once known as Little Ireland, Snowdonville, and Minden Station, before being renamed to Gelert in 1879. By the mid 1880's, Gelert's population was approximately 120 people, and the town was a shipping hub for cattle and lumber. Saw, shingle and carpet mills were operating in the area by this time.  The community continued to grow through the 1890's, with the addition of a hotel, a shoemaker, carpenter and wagonmaker, and a second general store. In 1895, the Anglican Church was built.

Farming was not sustainable in this area, and dozens of farms were abandoned in the first decade of the 1900's, for greener pastures in Western Canada. At the same time, the lumber industry was brought to a screeching halt when fire destroyed a majority of the surrounding woodlands. By 1910, Gelert was no longer the thriving bustling community it once was.

The town was never fully abandoned and a small group of residents still call Gelert home. Today, only a few of the old structures still remain. One of them is the Gelert Anglican Church, which is so overgrown that it is barely even visible from the road.

A small portion of the roof has collapsed, giving Mother Nature a P.O.E. of her own. The floor, which has several holes in it, is leaning heavily to the centre of the tiny church. To my left, the stained glass window is glowing bright, even on this overcast day. The podium, or pulpit, or pedestal, or whatever its called, is just slightly askew, as is the choir leaders podium. There are no hymn books or bibles to be found. Spiderwebs cover almost everything. Raccoon droppings are prevelant inside, as are cigarette butts and beer bottles. God clearly hasn't been here in a while.

Enter at your own risk

Please have a seat, thy Lord shall be with thee soon

The webs we weave

Preaching to the choir

Walk into the light

Preaching to the flock

Excitement was in the air as we parked opposite the overgrowth that hides the roadside Gelert Church in late June of 2014. That excitement was short lived and followed by a solemn sense of sadness and disappointment. The roof has finally collapsed under the constant barrage of time. 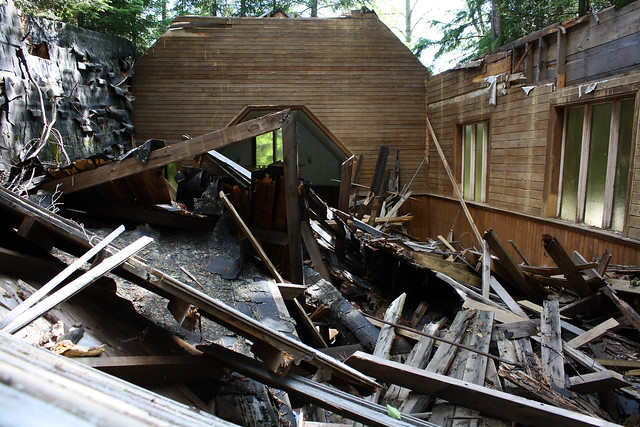 The Colonel, that is what we call this old abandoned farm in Havelock, Ontario. The TIME magazine from November 1968 that I found on a bedroom floor was addressed to Walter E. VanSheenburgh, but a descendant of The Colonel has informed me that the address label on the Time Magazine misspelled the last name, it is in fact Van Steenburgh. Other memorabilia indicated that he was a Colonel in the Canadian Army. Ohio and Ontario license plates piled and strewn about the garage and barn and field were all dated between 1966 and 1968, denoting a possible abandonment date. The front room of the house was wide open to the elements, and vines were sprawling across the floor at this time in late spring, glowing bright green. Walls were stripped to inner slats, and most of the insulation had fallen. Over an hour passed as we explored and photographed, and talked. The fridge was open and as I stopped to crouch and photograph it a second time, the floor started to crack under my feet. I instinctively jaunted forward, still looking through the lens and narrowly avoided the large hole in the kitchen floor. I laughed, lit a cigarette, and dropped another splash of sauce from my flask, before wandering out back to investigate the barn and walk down to the shores of Belmont Lake with my wife ninja IX. Romance ensued, if I can call it that. We continue to return and visit The Colonel on a regular basis.

blinded by the light

the itsy bitsy spider went up the explorers arm

pitfalls and hangers on

the case of the stairs

innocence is a myth perpetuated by ignorance

the house recognizes the chair

there were hundreds of license plates scattered about the property, all between 1966-68 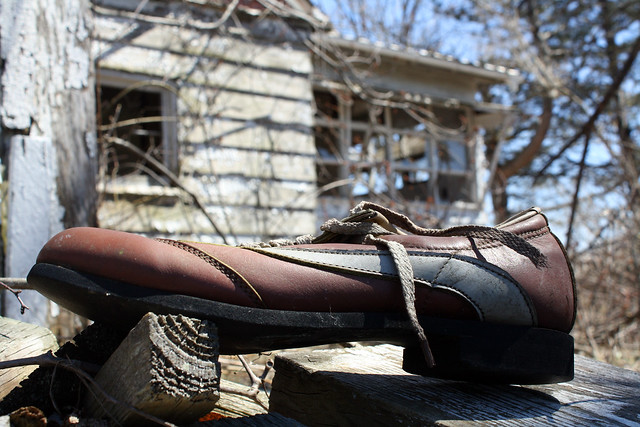 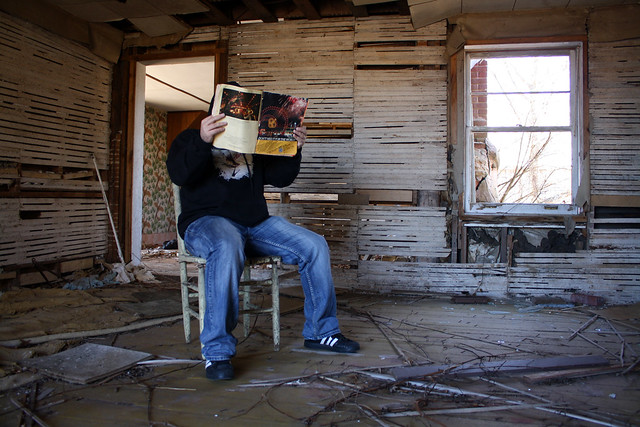 I have returned to visit with The Colonel more times than I can count, often bringing fellow explorers with me. Most recently, we stopped by last week while staying at our cottage around the corner. Since our first visit, all of the license plates have been removed or stolen.

After taking fellow explorer Intrinsic to The Colonel the following spring, he did some research on the Van Steenburgh family and their farm. Here is what he discovered, in his own words...

In 1925 Mr. Van Steenburgh attended the University of Toronto in the Graduate School of Zoology where he earned his M.A. and his Doctor of Philosophy in 1931.

Dr. Van Steenburgh began a career as a research biologist for the Department of Agriculture in 1927 while still attending university. Dr. Van Steenburgh held the position until 1940 when he joined the Canadian Active Army. In November of 1943 Dr. Van Steenburgh was promoted to Director of Artillery ando awarded the Officer of the Most Excellent Order of the British Empire (OBE).

Walter Van Steenburgh was also a member of the Havelock Masonic Lodge. In the spring of 1973 the two lodges decided to start annual Fraternal Visits with one another. This might explain the presence of Ohio license plates in the Mouse House barn that date back to the late 1960's.

A Time magazine found inside the house was dated 1968 addressed to a "Walter Steenburgh". This could be the father or the son.

The road that this house is located on contains seasonal homes still in use by the Steenburgh family today."

Thanks for taking the time to explore The Colonel with us. If you are in the area, or want to see what else is in the area, check out the Havelock Horse House, directly to the south, and the Victoria Methodist Church just around the bend. Until next time my friends.

We have returned to the Colonel on countless occasions over the course of the past few years and not much ever changed but the seasons. This year however, was a different story. The dangerously dilapidated barn that I had so delicately danced through on previous visits succumbed to last winter's ice storm and collapsed in on itself. The hole in the kitchen floor grew wider and wider as the floor beams rotted and collapsed into the dark basement. The fridge and freezer are now gone. Most notably, an excavator parked on the property for the better part of a year was recently used to tear down two rooms on the ground floor (the rear addition and the small nook off of the kitchen). And then the excavator disappeared.

This past weekend, we invited our good friends terapr0, tash.0, and David up to our family cottage around the corner from the Colonel. We swam and kayaked, we smoked and ate, and we explored.

Several locations were explored that weekend, but the highlight was bar none the hours we spent under a dark and cloudy night sky at the Colonel. Repeatedly, flashlights clicked off in unison as cars were heard approaching in the distance, and then light shone upon us all once again. Fireflies zipped in every direction above the long grassy field surrounding the house. Light painting, men in plaid jackets with hatchets, and a unicorn bride, it was all very ominous.

But first we stopped in during the day so everyone could familiarize themselves with the location and it's hazards, including the unstable kitchen floor with the gaping hole and the rusty nails sticking up from wooden slats and beams in the areas where the rooms were demolished. 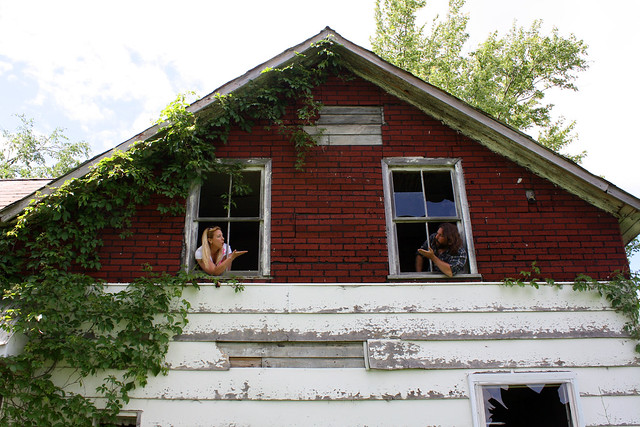 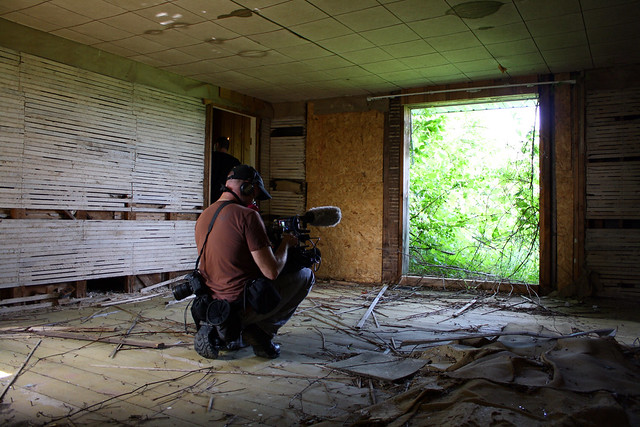 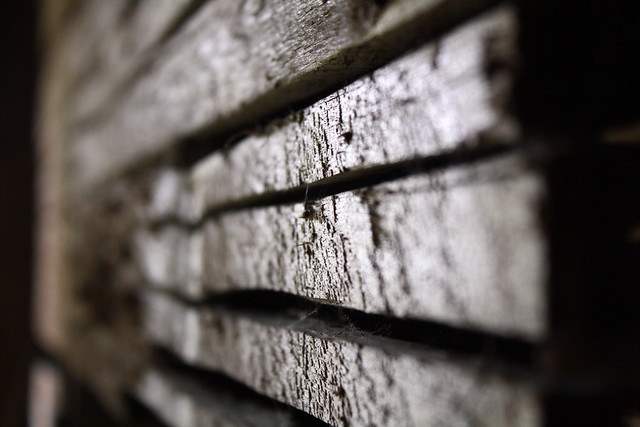 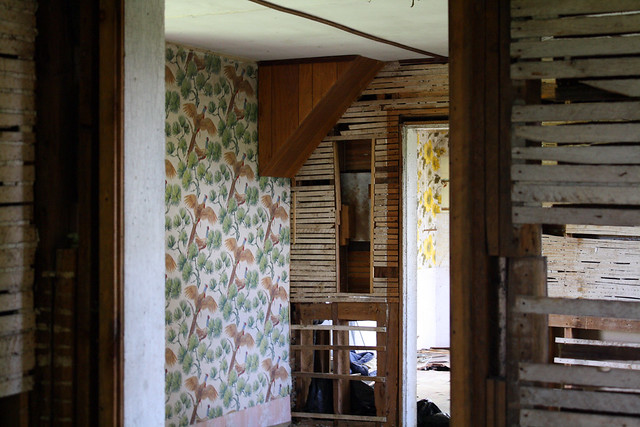 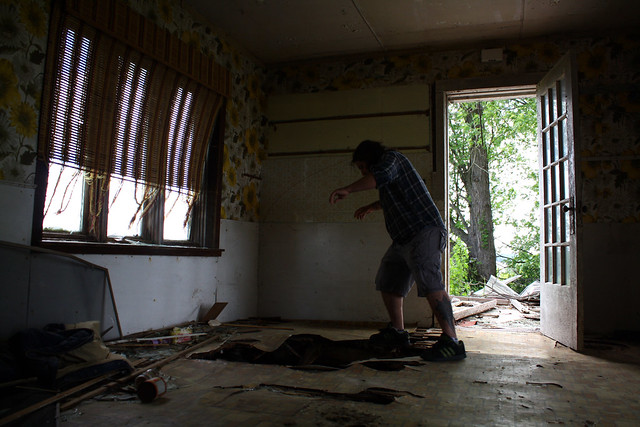 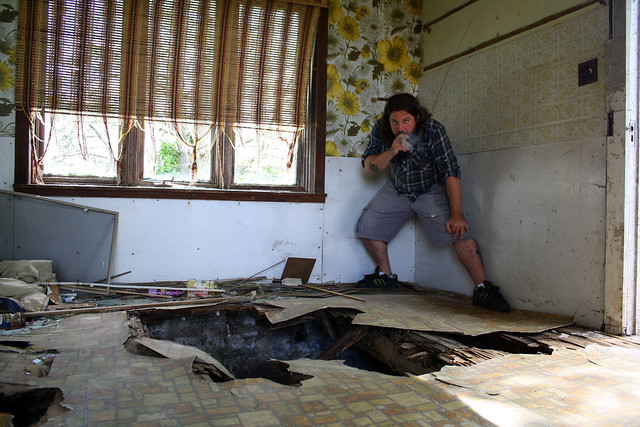 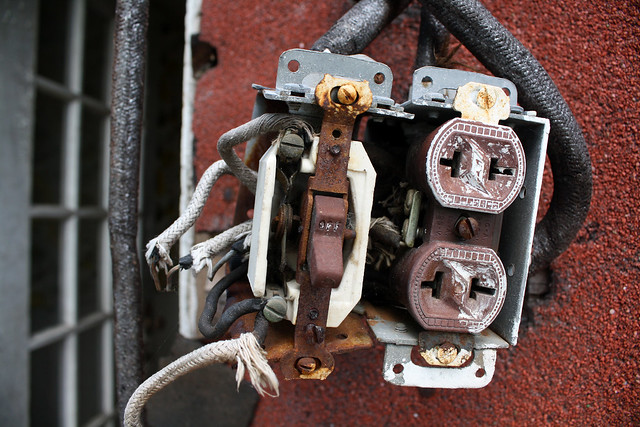 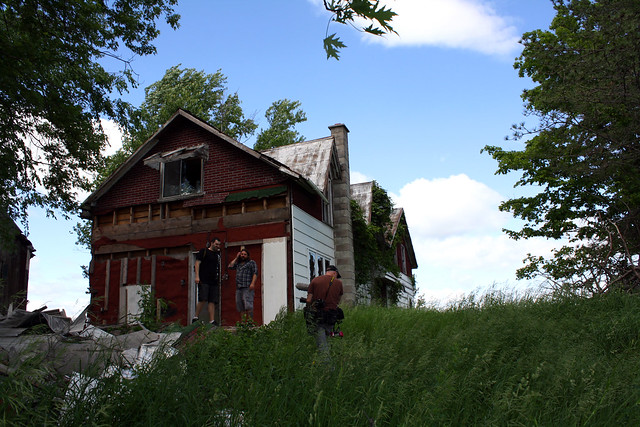 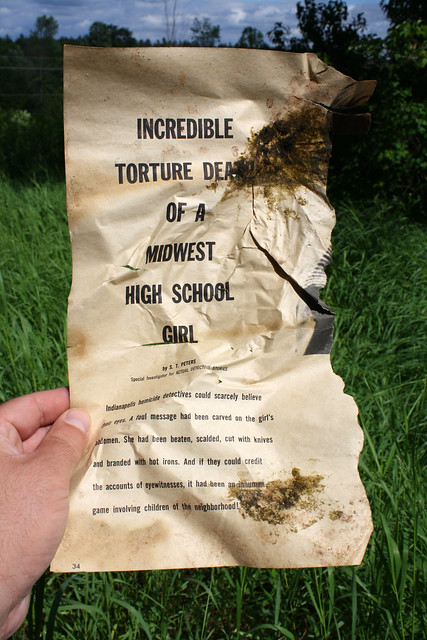 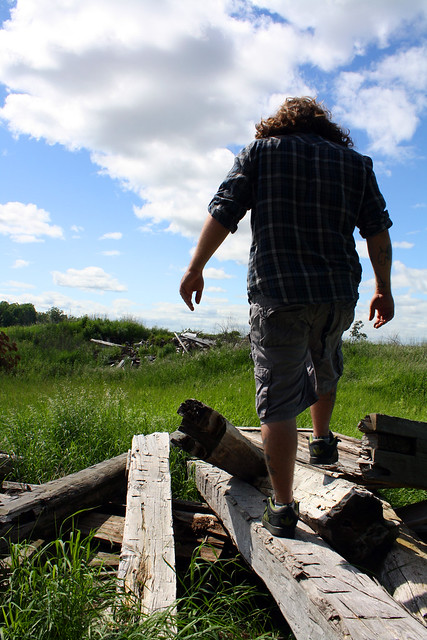 And then night fell... 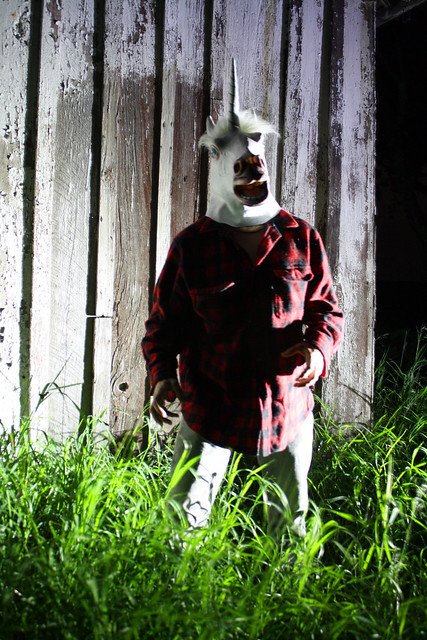 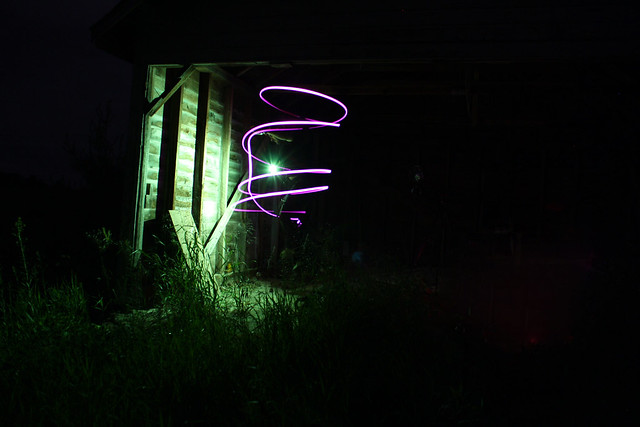 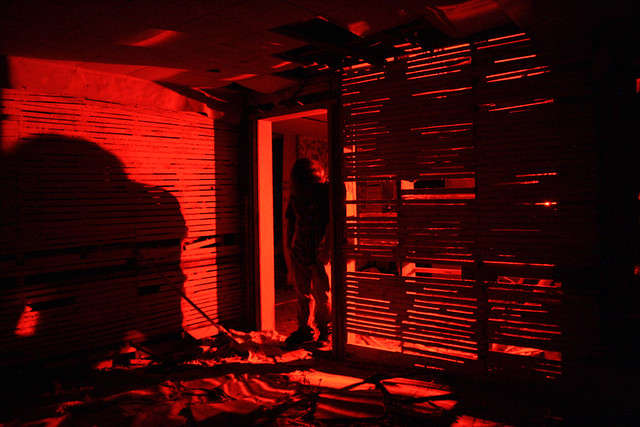 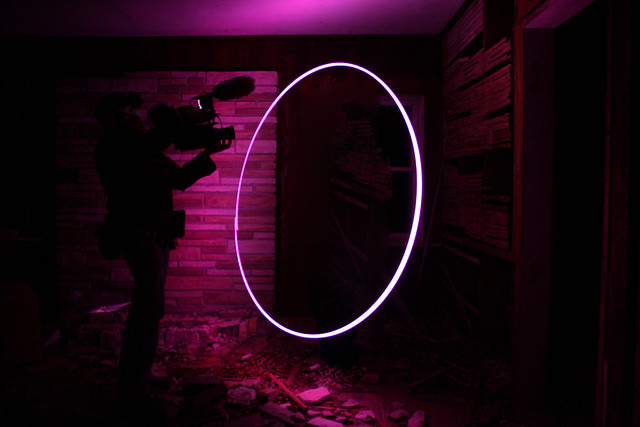 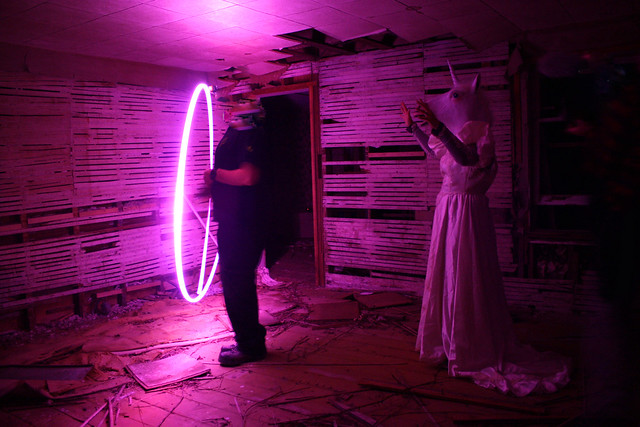 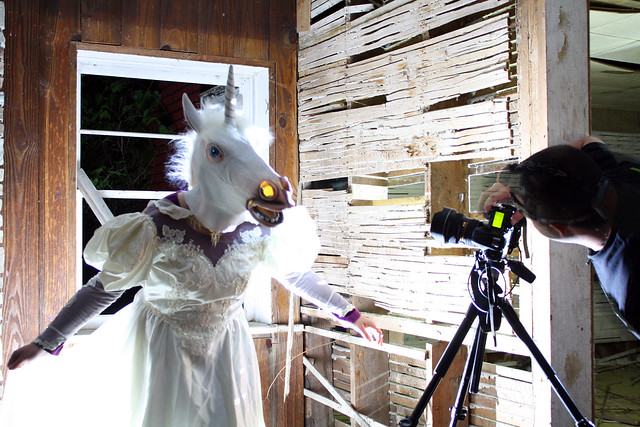 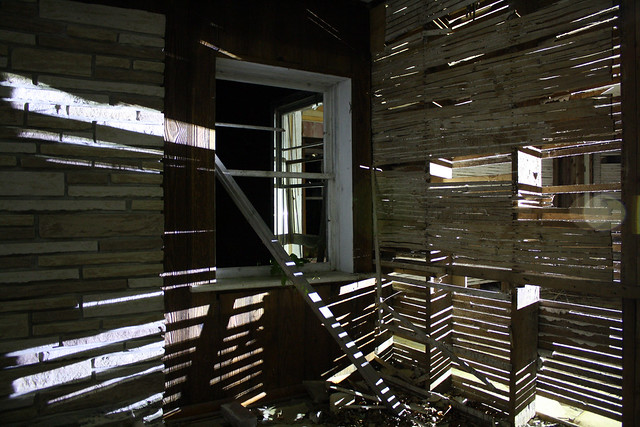 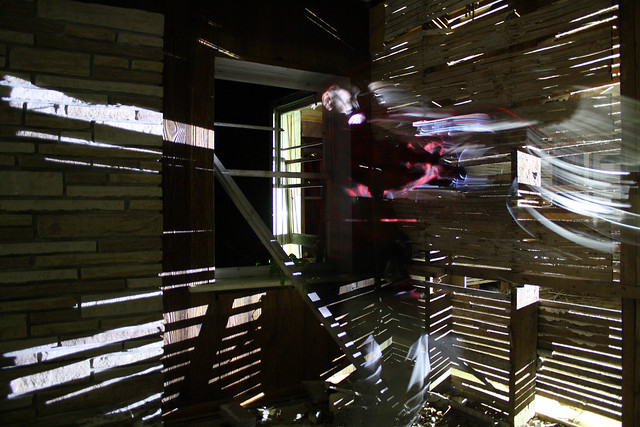 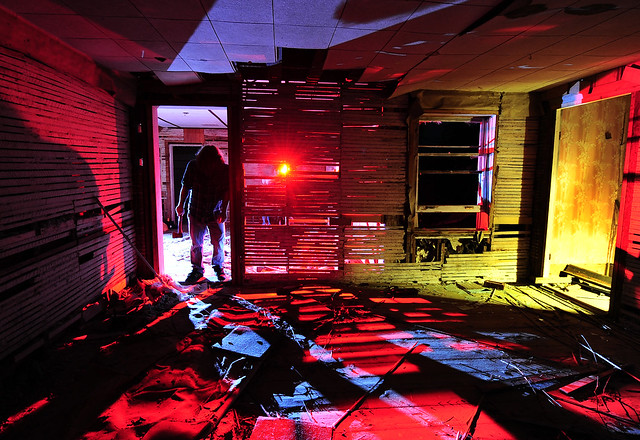 After these messages we'll be right back.