Posted by Unknown at 6:13 PM No comments:

Vitamin E can kill you and milk is not good for the bones
We use to go to dealers but now doctors are keeping us stoned
An apple a day is repetitive and so is beer and wine
Selling addictive personalities that sort of mirror mine
No symptoms showing but still I need an instant fill
It’s real. I’d kill for my next prescription pill

It’s not medicine it’s chemical concoctions
that scientists concoct and then package into boxes
Then corporations market it as innocent relief
to everyone from infants to senior citizens in need
Hospital’s privatized, the bottom lines you pay the price
Crammed in a hallway is not a civilized way to die
We need more doctors but that club is so elitist
and we need a better strategy than drugging up from fetus
Please diagnose my dying hopes, ask “Why am I supplying dope?”
“Doctor! It’s important!”
said as they walked into the morgue instead of the orphanage,
he was supposed to operate now he sees the baby’s corpse bleeding from all orifices.

I’m the captain of a sinking ship, rapping, drinking thinking it’s fixed
with a fist and depression at my fingertips
with the effects that linger then lift,
split
personality
and happiness hits, then it hit
Inside myself, someone else lives.

The human experience has been given a face lift
Mars, it isn’t far from the place they built the space ships
Now I am the stepson of an ancient civilization
I remember color but see only caucasian
Cultivated boy in a system once known as farming
But with meats and vegetables, not military's and armies

I melt into the horizon, devise lies and succumb to my vices
Hate surprises, but prizes man I’ll take the time to find them
Hate mail gets sent, nowadays, press send
Let’s end everything mentality when rejection sets in
I am but a human, my shelter’s made of wood
I built it with my own hands using anything I could
It’s structurally sound, firm foundation on the ground
My ape stance barbarian and very uninspired

Sanctum’s on a train somewhere, thanks yo, but I ain’t prepared
I’m thankful for each strand of hair
I’m anxious to end the sanctions on the chains I wear, the pains I bear
Jerm9 is not a perfect of person though the words he blurts are alert and observant

I’ve never been abducted by alien’s only government agencies
It’s tongue-and-cheek they way eye-nose what’s facing me.
My poison arrows pierce, my bow is narrow, fierce.
In amongst a field of totem poles and scarecrows,
No one seems to notice that I go the way my hair blows.
(I’m always logging my inner forest)

Having visions…
On my deathbed shivering
Having visions…
Of my mother on the same bed delivering
Hold it right there. I’m fed up with night terrors.
Battling self and that fucker don’t fight fair.

yesterday i came to the conclusion that i need to share my voice, literally. ninja and i spent the day creating thought bubbles on 8.5x11 printer paper, upon which we stenciled some of our simpler phrases and pasted them in the streets. the aim is to have the work itself be more engaging to the public and to urge people to interact with their environment, the message indeed changes with a person in frame. conversations and comic strips is where i plan on going with this, but that's for another blog.

last night was amazing. coming from ontario, the cold air and snow gave the night a very nostalgic feel. it rarely snows in vancouver. a flash mob of at least a hundred santa's storming through gastown as massive snowflakes raced towards the ground was surreal. every time we opened the back-pack to put up a piece it was covered in snow. on main st. at the edge of chinatown we put up this piece, the photo's in this blog were taken early this morning and are of passers-by. 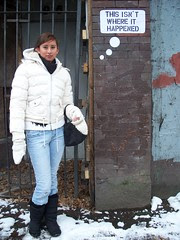 a few hours and a few pieces later, we're in an infamous drug alley in downtown vancouver pasting up an "i love this city" thought bubble. everything is covered in snow and my paste is in a yogurt container in a plastic grocery bag in the snow at my feet. the alley is unusually quiet as orange light spills over us from a pole with a leonard asper sticker on it. my brush is on the wall, pasting the paper to the red brick, as i look over my shoulder and say...
"there's a cop on pender", still pasting, oblivious to the obvious.
"cop", ninja whispers as he pulls into the alley. headlights are illuminating me as i toss the brush into the bag at my feet. the driver isn't even out of the car when he says "what did you throw sir?"
i confidently spout out "no sir, i assure you i did not." two flashlights perform a light show in circles on the snow covered cement around the bag and brush, ignoring them as he repeats his question.
"i'm sure i saw you throw something."
"so, what are you, shepard fairey?", officer two asks.
"who?" i stutter back. haha.
"how much have you had to drink tonight sir?" from officer one.
i say "around three". six or seven away from three, i think to myself.
officer two continues, "so, what is this, a collaboration?"
"what?" i say.
"well two people and art, that's a collaboration, right?" he says as i giggle inside like a school girl.
i tell him "we've been together for almost 13 years, so yeah, i guess we're a collaboration."
i picture him talking to his wife like that, 'hey honey, wanna collaborate on some children?'
anyway, cops, i think as i light yet another smoke. i peel the piece off the brick and put it back in ninja's bag as if that's protocol as we chat small talk while they run our names.
"you know what neighborhood you're in right?'
"yeah"
"Then you know why we stopped you?"
"yeah, i know."
"have a good night" they simultaneously say as they get back in their cruiser.

they had little interest and no concern for my art pasting, it was very re-assuring.

Ten minutes later we are a few blocks away unfolding the sopping wet piece and putting it up again. 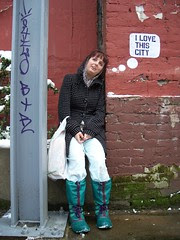 DIRECT QUOTES
the direct quotes series is fun for me, like many of them, this quote is from an underground rapper. Ill Bill
it may be offensive to some, but that is the point. war is pretty fucking offensive. 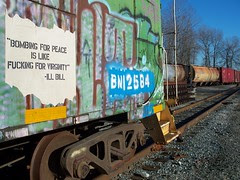